She moves to Brooklyn into an apartment with white plaster walls and long, narrow windows. Light pours in from the courtyard, and at night the neighbors’ lives play out next to hers, close enough to touch. She thinks a family lives just across from her, judging by the little kid drawings on the fridge, but she only ever sees the dad and the glowing Apple logo of his MacBook. She isn’t always as vigilant as she should be about closing the blinds before she changes after work, but he never seems to be home when she gets out of the shower. It reminds her of her sophomore year of college when she lived on the ground level of the dorm, and every so often she would look outside as she worked and make eye-contact with a student on his way back from class. It is hard to feel alone in this city.

The air mattress messes up her neck and she doesn’t have a desk, so on the third day she flips over a cardboard crate she used to move and kneels in front of it on a pillow: a makeshift work station at just the right height. Change the lighting a little and this would make a great hipster photo for the #Interiors tag on Tumblr. She strings up her red Christmas lights and stares out the window at the fire escape, longs for spring when she can sit outside with a notebook and a beer. She knows there will be stories written here, maybe a novella about early twenties sex and romance, but there aren’t any yet. She’s still taping up photographs of old love nurtured in Connecticut snow. Familiar faces smile back at her from the walls and it marks the newness of her life now.

She takes a lot of selfies for Instagram. Look, here I am at the subway stop. Look, here I am in the snow. There usually isn’t anyone to take the photo and that’s okay—this period of her life will be defined in retrospect by its solitude. She wraps the alone time around her like a shawl, nestles in the silence with her thoughts and new ambitions. She postpones all important decisions until April, when the winter thaws out and there is less social copy to prep, and when she will smell summer in the air as she passes Bergen Bagels. There are things she wants soon and there are things she wants later. On the fourth day she just wants a real bed.

Her roommate is never really home but is super nice and offers to help her build her furniture. There is no filthy dish rag on the kitchen floor for spills and the water pressure is weak but respectable. There are always so many people on the street. This is not Berkeley.

Five days in she gets her debit card ripped off, unwillingly financing a stranger’s road trip through the Midwest, and the securities management lady at her bank says, “Welcome to New York,” like it’s a rite of passage. On the way back from Ikea two men get into a fistfight in front of her on the subway, and she scrambles with other passengers to change cars lest they get pulled into the conflict. Everyone is shell-shocked but laughing and she thinks well I don’t live in Connecticut anymore and I can actually handle this. She is an odd mixture of naïve and jaded. It will probably take a couple months for her to stop hiding her laptop every time she leaves the apartment.

On her first Saturday in the city she is at a diner at 3am with other members of Little Wesleyan, talking about the co-education of fraternities and the culture she couldn’t fix. It is a relief to realize she is arguing with love for the friends who still breathe that climate every day, and not from a place of hurt anymore. She didn’t bring that baggage with her to Brooklyn—maybe it fell out of the car on the highway—and good riddance too because there really isn’t room for it here. This apartment full of light is for microwaving dinosaur chicken nuggets and taking the C train to work. It’s about catching friends in a butterfly net and holding onto them and their passion and their personal projects for an evening, for a working lunch, for a drink. This apartment is not about moving on or starting over, but she only takes with her what is still worth keeping. She has more identities than survivor, or ex-girlfriend, or alumna.

On the seventh day it is finally warm enough to wear her leather jacket. 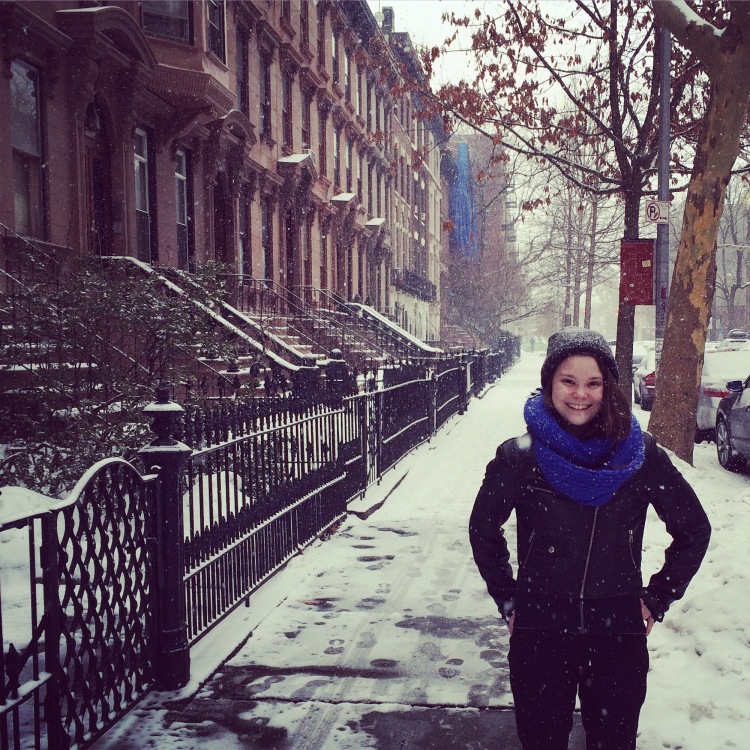