How we talk to Charlie Sheen matters too. In this regard, Matt Lauer failed. Of course we wonder if Sheen disclosed his HIV status to his partners. Of course we wonder if he’s transmitted the virus. Of course we wonder if his addiction will impact his treatment. But here’s the thing: it’s none of our fucking business. His interview on the Today Show felt less like an announcement and more like a trial. Lauer asked questions laced with accusation, judgment and thinly veiled disdain. They hit the worst elements of STI stigma: dishonesty, recklessness, posing a threat to others. It was painful to watch as someone who has faced those questions herself.

“Have you knowingly or perhaps even unknowingly transmitted the HIV virus to someone else since your diagnosis?”

“Have you had unprotected sex on any occasion since your diagnosis?”

“Have you since the time of your diagnosis told every one of your sexual partners before you had a sexual encounter that you were HIV+?”

“Would it be fair to say that you’ve been involved in all of [the CDC’s] risky behaviors?”

The tabloids have been whirling with rumors about who Sheen could have transmitted to, and if he was disclosing to his sexual partners. I can understand wanting to address these rumors head-on. But there’s a difference between someone with an STI sharing that information willingly and having it pried out of them by a reporter. It is certainly possible that Sheen and his team went over the questions in advance, and that he consented to being asked them before the taping. But that’s not how it plays to the audience, and it normalizes a line of questioning that dehumanizes people living with STIs. Lauer also reinforced misinformation about how HIV is transmitted, what it means to have “unsafe” sex, and lent credibility to the wildly panned laws designed to prosecute HIV+ individuals who have had sex with HIV- partners without disclosing. The interview did a lot of harm.

Watching Matt Lauer’s interview with Sheen was like watching my own personal nightmare happen to someone else. The most unsettling moment came when Lauer asked Sheen if he had transmitted HIV to any of his sexual partners. “Impossible,” Sheen said.

Lauer brushed this off. “We’re going to talk to your doctor with you in a second.” I can understand wanting a medical expert to discuss how transmission works, but the undertone of the question made me want to reach into the screen and throttle Lauer. I don’t believe you.

At one point, Lauer even read tweets criticizing Charlie Sheen to Charlie Sheen and asked him what he thought of them. I am sure Sheen has spent the last four years thinking the worst things possible about himself. That’s what caused the drug abuse and depression. There is no reason to repeat stigmatizing comments to a person with an STI. Absolutely none. 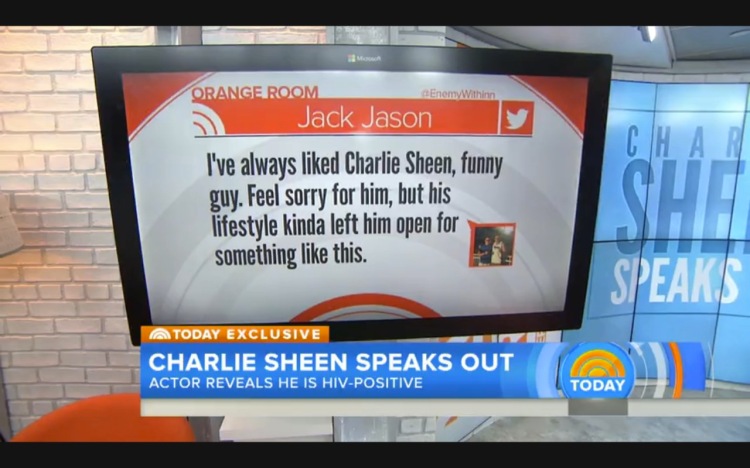 I want to take a minute to thank the journalists covering Charlie Sheen’s announcement with grace, awareness and care. Mic has been leading the charge with intelligent pieces about slut-shaming, HIV myths, depression, and journalism. I also love this piece by Rachel Feltman at the Washington Post about HIV stigma and what our reaction to Sheen’s announcement says about us.

Finally, listen to people living with HIV. HIV Equal has been talking back to the media coverage all day. This is not only about Charlie Sheen. This is about all of us.

Happy #bivisibilityday!
I’m back on my daddy kink bullshit. This month on Patreon I wrote about submission as a way to rediscover your sexual desire. It’s uhhhhh intense. Read ALL I HAVE EVER WANTED at the link in my bio.
Fun news!! I wrote about dating after an STI diagnosis for @bumble. Yes, the dating app! You can read it at the link in my bio.
What a fascinating book. I picked up Recipe for Persuasion at the library without any expectations, and reading it with an open mind helped me enjoy it. If I'd gone in wanting a rom-com, or even a romance novel, I would have been disappointed. Readers who picked up Sonali Dev's book hoping to read a light-hearted second-chance romance on the set of a reality television show are in for a surprise.