If you’re not watching The Bold Type yet, you need to get on that. A brand new series from Freeform, The Bold Type follows a trio of young women working for Scarlet, a hyper-feminist and almost performatively woke women’s magazine. There’s the scrappy sex writer learning how to orgasm while desperately wanting to write about politics. There’s the assistant who really wants to work in fashion while sleeping with one of the magazine’s board members who just so happens to be an unlikely wonderful human. And then there’s Kat, the social media director who is also a woman of color who may or may not be bisexual. Kat’s my favorite for obvious reasons.

In the most recent episode, which you should go watch on Hulu, Kat becomes the victim of a ruthless online hate mob. The episode is full of constant Twitter notification chirps and feeds being refreshed, with rape threat tweets appearing on the screen one by one by one. It’s a shockingly claustrophobic storyline in an otherwise peppy, splashy show, and quite possibly the first of its kind. The Bold Type’s depiction of social media abuse was accurate enough to give me an anxiety attack—no small feat for a program on the network formerly known as ABC Family. 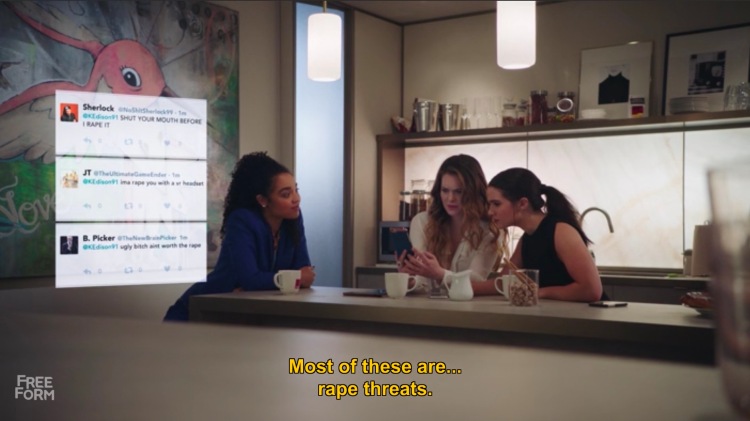 But while The Bold Type gave us a ground-breaking depiction of online abuse, it’s not exactly perfect. Here’s my breakdown of what the show gets right and wrong about social media harassment. Spoilers below!

What The Bold Type gets right:

Social media mobs are often in retaliation to a woman calling out an injustice, and can be encouraged by industry leaders. At the beginning of the episode, Kat learns that women are more likely than men to experience motion sickness while using VR headsets. She dashes off a snarky article for Scarlet’s website calling out the sexism of the male-dominated VR industry, hilariously headlined “Hey, VR Bros, Don’t Forget the Female Gaze.” Replies to her tweets come pouring in from misogynist trolls within a few minutes. The mob quickly identifies her as the author and begins launching personal attacks, including calling her every slur in the book, digging up her nude photos and tweeting her residential address. No one in the VR industry comes to her defense, except a female start-up founder who reaches out to express solidarity. The show makes it clear that Kat is being punished for addressing an obvious flaw in the VR world caused by gender bias, and a horde of men immediately rises up to put her back in her place. 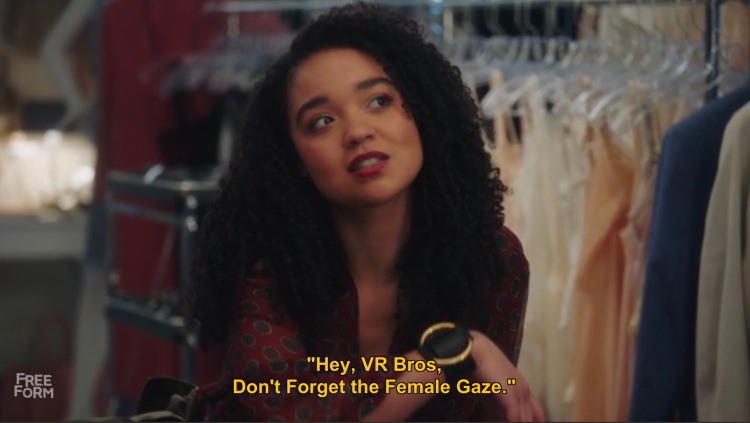 A dogpile (or a rapid onslaught of tweets and messages) can be traumatizing and make simple Twitter notification sounds triggering. It is staggering how quickly a hate mob forms online, and the sudden, sustained rush of slurs and threats is nothing short of petrifying for the victim. The Bold Type does a great job depicting just how constant and unrelenting a dogpile is when it’s in full swing. When you’re at the center of all of that hatred, it consumes and freezes you. Kat scrolls through the endless feed of bile in her Twitter mentions with a horrified expression I remember seeing on my own face. When her coworkers’ phones chime and announce new tweets during a meeting, Kat has a panic attack and walks out of her own presentation. It strongly reminded me of the day someone emailed all of my co-workers and directors outing me as bisexual in the middle of a meeting I was leading. It’s a scene so real that I had to stop watching and return to the episode later.

Online harassment can have a huge impact on the victim’s professional life, both by hurting work performance and damaging their reputation at the office. Kat is lucky to have a supportive boss who recognizes the danger she is in and does everything she can to help Kat stay safe, even pulling in the company’s legal team. But most workplaces are not understanding of digital safety concerns. If a female employee’s nude photos are hacked and distributed, often that woman is judged by her peers instead of supported as the victim of a crime. It’s unclear if the male board members listening to Kat’s presentation see her topless photos during that meeting or if Kat is catastrophizing, but either way, it’s not hard to believe her credibility at Scarlet would take a hit. The dogpile throws her off before her presentation, one she was confident she would knock out of the park easily. And because Kat is Scarlet’s social media director, she is unable to “just log off” and ignore the tweets—unhelpful advice given all too often to victims of harassment. If Kat just wants to do her job, that means witnessing her abuse at deep emotional cost.

There’s pretty much nothing you can do to defend yourself, or make it stop. When the trolls targeting Kat tweet out her home address, a practice known as “doxing,” her friends ask her what they can do. Kat tells them that the IT department is trying to locate the guy’s IP address but can’t (man, have I been there), and the police aren’t an option. Unfortunately, she’s right. Online harassment is routinely dismissed by the authorities. The most egregious example is journalist Amanda Hess’s story of reporting rape and death threats to the police, only to be asked by her detective, “What is Twitter?”

What The Bold Type gets wrong:

Women of color are the most vulnerable to harassment and receive it based on their gender and their race. In a bizarre oversight, Kat’s race is never mentioned in the harassment itself, or even by the show. The Bold Type depicts social media abuse as something women face, not something marginalized communities face. And while Kat’s sexual orientation remains something of a mystery (even to her), the fact that she is most likely a queer woman of color who may or may not be falling for a lesbian Muslim artist means her experience of harassment would be far more intersectional IRL. Get it together, The Bold Type.

There is no real way to “get back at the trolls,” and Kat’s #TweetWithKindness campaign is a cop-out. At the end of the episode, Kat collaborates with other women in the VR industry who have been the victims of misogynist abuse on Twitter. They make a short PSA reading tweets they’ve received and urging people to “tweet with kindness.” While I understand the narrative need to show Kat taking back her agency and making something productive from the trauma she endures, the video is a cliché. The Internet is rife with viral videos of victims reading the mean tweets they’ve received, and it’s part of a frustrating pattern of making women relive the abuse they’ve gotten online for the education and entertainment of other people. Not to mention that if Kat had released the “tweet with kindness” video while the dogpile was ongoing, it would have delighted the trolls targeting her and quickly become a target of derision. The PSA felt like a lazy choice for the writer’s room, a pat conclusion to a complicated story. That Kat gives Scarlet’s business to a female-lead VR startup is the much more rewarding ending to the plot line and I wish they had stopped there.

Telling victims of online abuse to not engage with trolls is not helpful advice. After Kat replies to a troll who insults her breasts, Kat’s boss scolds her, “These are pathetic, bored, angry people, and if you engage with them, you’re giving them exactly what they want.” Kat responds, “I know that, but I can’t just sit here and do nothing.” While it’s true that responding to trolls can encourage more harassment, it can also make a victim feel less helpless. Considering the ultimate goal of harassment is to silence the person receiving it, the whole “don’t feed the trolls” line has always felt condescending and obtuse to me. Unless you have actual, practical advice, don’t tell a victim what to do, or what not to say. And some folks have turned engaging with trolls into an art form. Feminist writer Lindy West has since left Twitter, but she was the master of outsmarting her Twitter trolls with flare. The example she set inspired so many women to be less afraid and to know that they can survive and conquer despite the nastiness of the Internet.

Telling victims that they’re “strong” enough to endure abuse undermines the very real psychological impact it has, especially for young women. According to Bailey Poland, author of the fantastic book Haters: Harassment, Abuse and Violence Online, the intention of harassment is to make victims feel worthless. Women who are subjected to online harassment often experience anxiety, depression, shame, fear, self -harming behaviors, eating disorders, and suicidal ideations and attempts. If you have experienced any form of sexual or physical violence, online harassment can trigger panic attacks and other symptoms of post-traumatic stress disorder. Praising a victim’s strength only deepens their shame when they are afraid, anxious and unwell. It furthers their embarrassment that they are not “strong” enough to laugh off the vile messages they are receiving. When it comes to digital abuse, “strength” has little to do with it. A better message to send to the young women watching The Bold Type is that online harassment is not their fault, is not right, and must be stopped.